"He who joyfully marches in rank and file has already earned
my contempt. He has been given a large brain by mistake,
since for him the spinal cord would suffice."
~ Albert Einstein ~

Einstein is onto something. 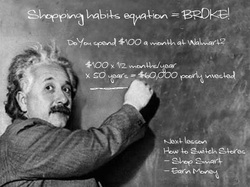 Would you like to get paid every month to shop?

Now which side of the chart do you see yourself benefiting more from?

The Internet is revolutionizing the way people shop!
What if we paid you;

We have people just like you earning these amounts every month.

Learn the Real Truth about WAL*MART.
Will you still shop there after you read this?.

WAL*MART shares little of its $11 billion profits with employees. To boost its profits by 1 percent, Wal-Mart is seeking to reduce its contributions to the profit sharing and 401(k) plans from 4 percent of wages to 3 percent of wages.

So why do people shop there?

Call to Action:
Please contact the person you are reviewing this information with now and ask them to answer any questions you have. Would you consider shopping smarter today?
“He who will not economize will have to agonize.”
~ Confucius 551–479 BC ~